In recent years, the use of video surveillance in the private sector has become an increasingly valuable security measure. In fact, studies have shown that employing a closed-circuit television system is the most effective method of ensuring that criminals are correctly convicted. "A picture is worth a thousand words." This saying rings true in court. According to a recent study, when a jury is presented with video surveillance footage, it is twice as likely to convict than when not shown video surveillance evidence. The strategic placement of covert video surveillance cameras aids in the detection and prosecution of vandalism, theft, child abuse, elder neglect, stalking, and harassment. As a result, video surveillance is increasingly common at offices, schools, nursing homes, construction sites, hospitals and retail stores.

Nonetheless, many of our customers are concerned about the implications of employing such technology in stores, banks, airports, and other facilities in need of serious security. We receive countless inquiries from customers worried about the laws and regulations concerning video surveillance, both concealed and overt. Of course, the most important legal question for buyers at our company is whether or not signs declaring the use of video monitors are legally mandated.

In practice, most video surveillance cameras used by businesses are paired with a video surveillance notice sign. The debate, however, about notification has been raging for a few years now. The lack of legislation from the U.S. government surrounding this issue is more than a little surprising. But many countries do not follow the lead of the United States. Canada, for example, has legislation which, based on private sector privacy laws, requires that any "organization conducting video surveillance post a clear and understandable notice about the use of cameras on its premises to individuals whose images might be captured by them, before these individuals enter the premises".
[1] The United Kingdom also closely regulates private sector video surveillance in association with the Data Protection Act of 1998.

When is Video Surveillance Illegal? 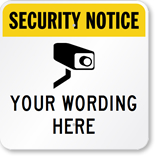 Covert video surveillance is illegal when:

Audio surveillance is also taking place, without the consent of those being monitored.

The person being monitored by the video surveillance has a reasonable expectation of privacy.

Covert video surveillance may be illegal when:

The subject under video surveillance has a right to counsel, as when being questioned by law authorities.

The person in charge of the premises has not given permission for video surveillance.

If you opt to incorporate a covert video surveillance system into your home or business, consult with a lawyer or your local law enforcement agency to ensure your compliance with local, state, and federal video surveillance laws. A sign, in many cases, is an effective way to openly inform others that video surveillance occurs and is not being used for covert purposes.

When is a hidden camera prohibited?

Several states have laws prohibiting the use of hidden cameras in certain circumstances, such as in locker rooms or restrooms, or for the purpose of viewing a person in a state of partial or full nudity.

Again, we advise you consult your local & state laws before installing any "hidden" camera.

When is a PI prohibited from using a hidden camera? When do the video surveillance sign and notification rules apply?

Your private investigator should be well versed in such laws and as a rule of thumb; you should not have to worry about this when hiring a professional investigator. Nonetheless, this may affect your case in some ways. It is important that you realize that unlike Hollywood's version of spousal surveillance, private investigators will not peek into windows, hide in the bathroom, put a micro-camera under the door, etc.