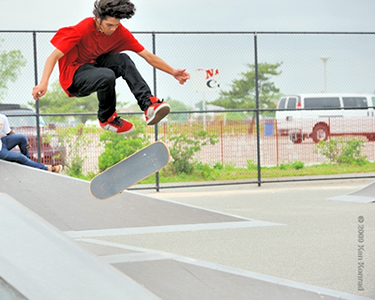 Skateboarding is one of America’s most popular recreational activities (Image used under Creative Commons via flickr.com).
While skateboarding can be considered a recreational activity, an art form, and even a mode of transport, the “extreme” side of the activity – and the risk and damage that goes with it – can unnerve people.
Steve Cave, a skateboarding instructor and enthusiast, has said that skateboarding’s popularity is tied to the “sense of danger” achieved after pulling off a good trick. Even though this danger may be rewarding to the skateboarder, it can be a menace and liability to the owner of the property where it occurs.

Skateboarding can often be a dangerous activity so precautions need to be taken (via mysecuritysign.com).
Because it’s an inherently unsafe activity, laws exist to regulate, ban, or control skateboarding. Skateboarding laws are determined by state and local ordinances, and they’re usually within the jurisdiction of state traffic laws or under health and safety codes. Additionally, the laws that affect skateboarders are often grouped together with laws affecting bicyclists, rollerbladers, and other pedestrians, although some laws may target skateboarders specifically, such as local ordinances that prohibit skateboarding in bike lanes or on sidewalks.

Skateboarding is prohibited on many sidewalks and bike lanes across the country (via mysecuritysign.com).
Skateboarding laws restrict or prohibit skateboarding as a recreational activity. The time, manner, and age of the person skateboarding are all factors. For example, in Martinsville, VA, an ordinance now bans anyone 14 years of age or older from skateboarding on sidewalks – it’s considered a misdemeanor and is punishable with a $50 fine.
The majority of city governments, among them the Los Angeles city council, require skateboarders to obey stop signs and speed limits, and prohibit skateboarders from being in the way of other vehicles. Correct signage can not only free property owners of liability but can also help prevent the large number of accidents that occur each year.
According to the U.S. Consumer Product Safety Commission, more than 25,000 people a year are treated in hospital emergency rooms with skateboarding-related injuries. Nearly three fifths of those injuries involve children under the age of fifteen. These dramatic numbers are pushing local governments to enforce stricter laws when it comes to skateboarding.
Even though skateboarding on the sidewalk or on the street can be extremely dangerous, what is especially hazardous is the harm done to private property both to the land and to the skateboarder. Martinsville found that skateboarders doing tricks have damaged property in the city center, including benches, handrails, and cement structures. Residents believe that skateboarding will soon be banned completely due to the “damage to property caused by young people enjoying the sport.”

Without the correct signage, private and public landowners can be liable for any injury that occurs on their property (via mysecuritysign.com).
“Premises liability” means that a public or private landowner may be held liable for injuries that occur on his/her property, especially if these injuries are “foreseeable.” This includes cases where a minor (or underage person) was invited onto the property, but it can also apply in areas that are tempting for skateboarders but lack signage forbidding skateboarding. For this reason, property owners are sometimes concerned when they see skateboarders on their land – so fear of liability explains why an outburst of ordinances has emerged to help property owners to feel more secure in their responsibilities.
Despite emerging laws and regulations, there’s an upside for all the skaters out there! Public areas designated for skateboarding – like municipally funded skate parks – reduce the number of accidents and the number of liability cases. According to the city attorney for Tulare, California, as long as the rules are clearly posted at the skate park, and the “right ordinance is on the books,” they are no longer liable in case of injury, leaving it in the hands of the police to enforce the city’s rules.

Marked out spaces such as skate parks can reduce skateboarding hazards on private property (via mysecuritysign.com).
In an effort to channel its skateboarders into a single area, Bradenton, FL recently constructed a skate park that’s now considered one of the best in the country. Councilman Bemis Smith remarked that the skate park is meant “to stimulate activity.” He also said that this skate park sees more activity than many other parks in the country. It is in a town’s best interest to create selected spaces for skateboarders to skate in so that they are no longer a danger to private property. 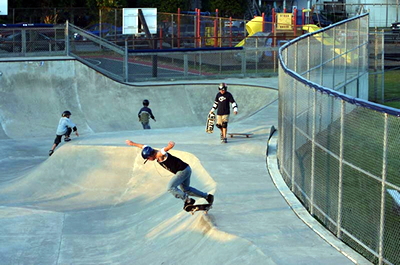 Skate parks are being constructed across America such as this one in Ocean City, MD (Image used under Creative Commons via google.com).
Meanwhile, in Alaska, numerous skateboarding facilities provide area residents and visitors with a safe environment for practicing tricks on ramps and obstacles designed for both beginners and advanced skateboarders. Most Alaska state parks are public facilities managed by the parks and recreation department in the municipality where they are located.
Like many other skate park initiatives, LAUNCH: Community Through Skateboarding is a Fort Collins, Colorado nonprofit devoted to empowering individuals to better themselves and the community through skateboarding. The organization creates spaces where people of all ages can enjoy the sport in a safe and clean environment. Through community building projects such as LAUNCH, designated places are being developed for skateboarders to enjoy their sport away from private property and cars.
With the right signage and the right initiatives, skateboarding can still thrive as a social good. Skateboarders can increasingly gather together in skate parks without risk of damaging property or being a hazard to others.
Please consult your local laws to find out how signs affect your responsibilities.
© 2022, MySecuritySign.com